February 16th and 17th was forecast to be another blue sky winter day. Six NWSKers donned thermals and pogies for a North Wales weekend. Here Jimski warms his hands up in the outfall from Wylfa power station. That's not spray in the sir, it's steam. The water was like bathwater. 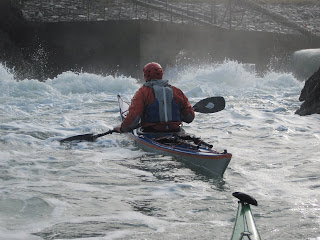 We paddled from Cemlyn, along the north coast of Anglesey to Bull Bay, past caves and spectacular rocky scenary. The sea was calm enough to permit close inspection. 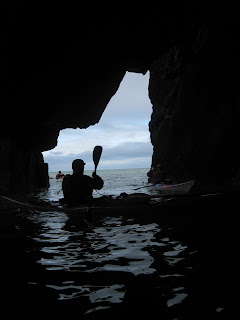 Bull Bay was our lunch stop and a chance to soak up some rays. Out of the chilly breeze it felt quite warm in the sun. 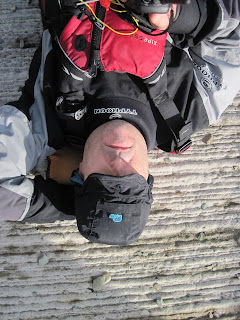 The return journey was tide assisted, and so a more direct route was taken. We couldn't resist this cave for a second time though. 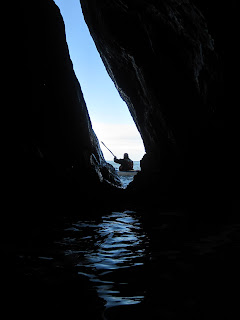 The following day was just as blue and calm, so another trip was in order, this time round the Great and Little Ormes. Having sampled the bathwater yesterday, Jimski felt in need of a shower and tested the hood on his drysuit in one of the many waterfalls to tumble from the heights of the Orme. 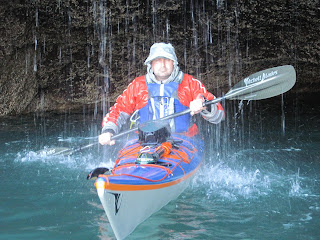 Birds were very much in evidence, with hundreds of guillemots standing to attention along every ledge in the cliffs. 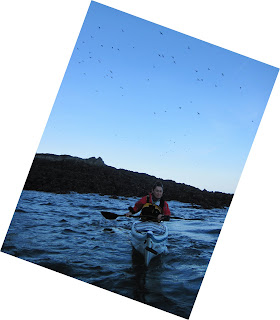 More birds on the return journey between Great Orme and West Shore. This time the Oystercatchers line up facing into the wind as though in formation. 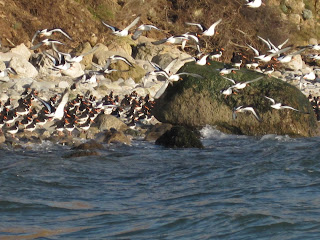 Seals laze on a beach near Little Orme, pretty much oblivious of our presence. 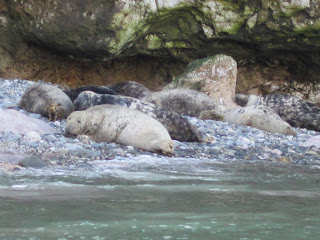 What a fantastic couple of days, stolen from winter. It almost felt like spring was springing.
Posted by Kate Duffus at 18:36