I’m a self confessed ‘Islandaholic’. I love islands. I’m not sure I have reached the required degree of insanity to consider the UK a paddle roundable island – yet, but smaller islands are always in my sights.

The Isle of Wight is no exception, and when the opportunity arose to spend a week there (ok, so it was in February, but it did include a spring tide, of sorts) there was really only one plan for my paddling.

Circumnavigating the Isle of Wight is as much an exercise in tidal planning as it is an endurance event. Get it right and you have a favourable tide all day, wrong and its like going up the down escalator.

High water (Portsmouth) dictated a pre-dawn start at the western most end of the island. My plan was to do the Channel coast first and then the Solent coast on the ebb, getting the exposed bit out of the way first. The wind was forecast to be ‘variable 3 or less’ which translated as ‘in my face all morning’.

I've divided the coastline up into very roughly equal quarters. 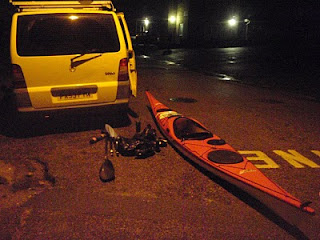 I was up at 4.45 am in readiness for a 5.30 start. It was pitch black and more than a little eerie launching into the blackness. At this point I felt really alone as I pointed my boat towards the occulting light of the Needles Lighthouse. There were plenty of navigational marks against which to measure my progress and it wasn’t long before I was looking at the giant stacks that make up the needles. The first gap was high and dry so I headed straight for the second, to be met by a considerable tide race against me, and then, crunch, where was all the water? A bit of fast manoeuvring and all was well. Light was just beginning to materialise, though my eyes by now were well accustomed to the dark. 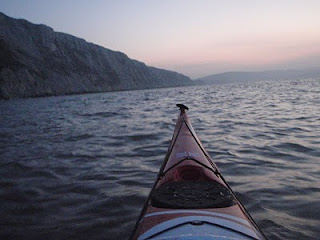 The section from Freshwater Bay to St Catherine’s Point was a series of low, crumbling cliffs, famous for the fossil dinosaurs within, but for me, memorable for the succession of headlands, each of which I thought to be St Catherine’s, only to be disappointed as another appeared beyond. This was as cruel as the false summits on a mountain climb. Thick haze reduced visibility so that I could never be sure there wasn’t another headland beyond the one in front of me. Biggish surf waves came at me from the side with no obvious warning. This was incentive to stay awake and alert if ever I needed one.

Sun appearing over one of many headlands that weren't St Catherine's 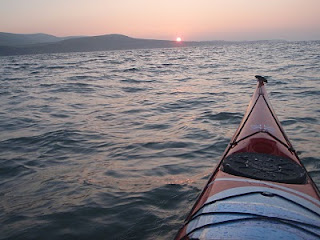 When I finally reached St Catherine’s Point I was in no doubt as to my location. The squat little lighthouse and tide race gave it away. I had hoped for a little more of the tide race, especially considering I had reached it at mid tide, but I made do with what there was, and my speed increased noticeably.

I failed to make best use of the flow at St Catherine’s and kept close to the shore into the ‘doldrums’ of an eddy as I made my way towards Ventnor. This section of the journey is, for me, dominated by the direct crossing of Sandown Bay to the magnificent white of Culver Cliff. It went on forever, the monotony broken briefly as I passed close to an anchored ship. On reaching the white cliff and regretting not wearing sunglasses I was looking forward to a short bimble to Foreland, and another milestone passed. It was not to be that simple. On the corner of the cliff I was met by a strong tide race against me, requiring a big ferry glide and expenditure of a lot more energy than I was ready for. The last 3 km to Foreland seemed to take forever. I was pretty tired by this point.

'So near and yet so far', It looks close but took me ages to get to the corner 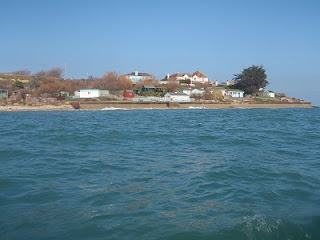 From Foreland to the site of the new Bembridge lifeboat station, less than a kilometre on the map, I failed to find any favourable tidal flow and floundered around at about 4km/hr for what seemed like ages. Things improved by the time I reached St Helen’s Fort, and I was soon zipping along at nearly 10km/hr. As my speed picked up, so did the amount of shipping. I had to pass Ryde pier, where the Sea Cat fast ferry arrives and departs at incredibly short intervals. Just to make it more interesting, the hovercraft ferry lands just beside the pier. I felt a bit like a hedgehog crossing a motorway. I stayed well offshore approaching Ryde to avoid the shallows, and then continued offshore all the way to Cowes. Flow was fast and I made good time.

I really didn't want to get run over by one of these. 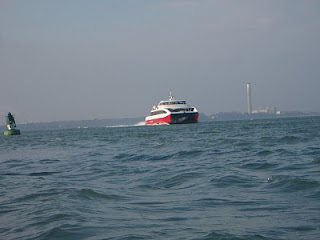 By the time I crossed the mouth of the Medina river at Cowes and avoided ferries, Sea Cats and gin palaces I was into the final hours of the ebb. My speed slackened noticeably, now this could have been because I had been sitting in the boat for more than nine hours already, or it could have been because I had run out of tide. Maybe a bit of both. The final section of my little adventure seemed to take forever and I finally reached my starting point twelve hours and fifty minutes after I had set out. 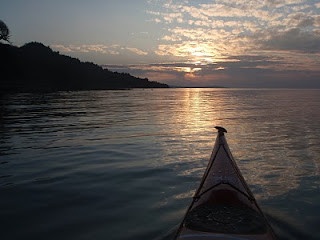 As I landed on the soft sand beneath the slipway, I fell in the water as my legs were unable to support me. How daft I felt, staying dry for 92 km of paddling and then falling in in the last metre. How I wished for someone to be waiting for me, to help carry my boat to the car, but no, this was a solo and unsupported effort, so I strapped the boat to its trolley and lugged it to the car.

I think I paddle better when I am on my own. In company, there is always a pressure to keep up with someone else, or to have to wait for someone slower. I like to set my own pace and then stick to it. I use a GPS as a speedo so that I can keep check on myself, and also keep track of how much tidal assistance I am getting. During the long featureless sections I employ a range of tactics to keep my mind working. I count strokes and then work out how many strokes to a kilometre. Then over the next three of four kilometres I test this out and work out an average. This figure of course changes depending on how much tidal assistance I am getting, so I repeat the procedure several times. I also like to try and predict what time I will arrive at a point in the distance. Then sometimes I coach my forward paddling technique. I will concentrate on one particular aspect of the stroke for ten minutes, then move onto a different aspect. I can continue this for at least an hour. Every time I start a new ten minute block my speed goes up, then gradually over the ten minutes it reverts to a baseline of about 7km/hr.

This is by far the longest paddling day I have ever done, but I hope will be the first of many long trips. I paddled the day after a small spring tide. It would certainly be a quicker trip on a better tide. Wind was forecast to be variable force 3 or less and I would estimate that it was SE force 2 most of the day. It was dry and sunny with an air temperature of about 5 degrees. My Cetus LV performed fantastically well. It is fast and holds a straight line very well, but is still manouvrable and fun in lumpier conditions. I found the cockpit comfortable even after nearly thirteen hours without getting out.

Watch this blog for further long trips and circumnavigations in the future.
Posted by Kate Duffus at 19:18 5 comments: