What to do with a week of rubbish weather

Having decided that I needed a paddling trip, I took a look at a weather forecast. Not great, but not a disaster either. I settled on Bute and Arran as a venue as I thought it would be a little more sheltered than the more westerly islands.
Set off from Largs feeling somewhat lethargic and plodded across to Great Cumbrae and then on to Bute. I had a headwind all the way and this may have contributed to my impression that I was paddling really badly. Maybe I was just paddling really badly. Camped at a picnic site near Port Bannatyne. It rained most of the night. This was a theme to which I was to become accustomed.
Next day dawned dry and I set of northwards towards the Burnt Islands (strange name?). I could see the small Cal Mac ferry from about 5 km away and it didn't seem to get any closer for ages. The Burnt Islands were a cacophony of bird song. Lots of young birds, yet to gain their adult plumage and squawking adults warning me to keep off. I kept off.
Round the corner I came to the 'Maids of Bute'. This would do for a lunch stop, so I battled up through face-high bracken to get a picture. 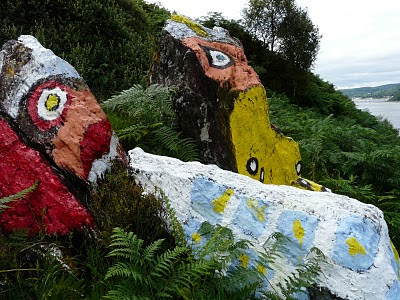 Continued on down the Bute shore until I saw the Island of Inchmarnock. There's something really satisfying to land and camp on an island that you can't get to by ferry. Found a lovely place for my tent... 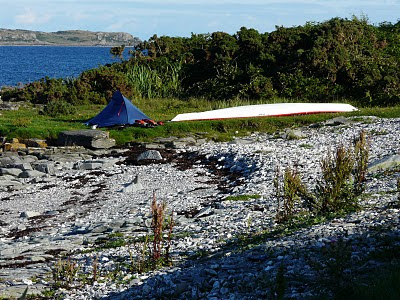 ...with plenty of company. They sang strange songs all night. 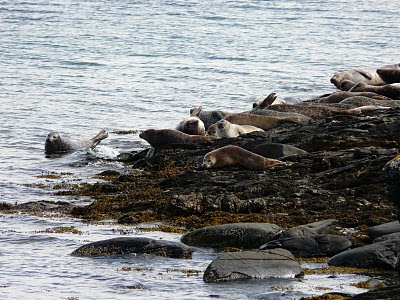 Next morning set off to cross to Arran. All was well, light wind and no rain, until I got to Lochranza. From here on it was a struggle to make progress. The headwind slowed me down and made sure that the rain found its way into my cag and down my neck. It was thoroughly miserable. Once I decided that I'd had enough it was another 5 km or so before I found somewhere I could land and camp. One problem I've discovered with solo expeditioning is that I have to find very easy landing places as I can't just carry my boat over rocks. I take a trolley with me, but it can only cope with fairly smooth surfaces.

This is where I ended up; and just for once it isn't raining. 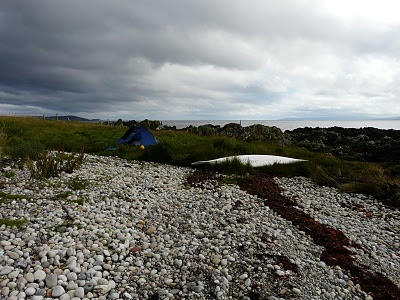 I awoke at 5am to find it dry and flat calm. By a more normal start time of 9am it was drizzling and the wind had increased, again in my face as I set off. I planned to reach the village of Blackwaterfoot for lunch, in the hope that there would be a cafe. No luck, but I did manage to replenish my dwindling rations and then shelter in a bus stop to eat lunch.

I set off again just as the sky lightened and rain eased. I had also turned a corner and now the wind was partly behind me. It made for much more pleasant paddling conditions. I finally stopped for the night on the southern shore of Arran, almost opposite the island of Pladda. Ailsa Craig appeared out of the gloom as clouds lifted and the remaining afternoon and evening were clear and sunny. 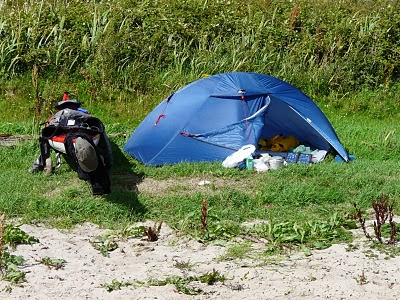 During the evening I spent at least an hour sitting on rocks looking at and photographing a pair of seals. At a guess I would say they were mother and pup. Their expressions and movements reminded me of a pair of fat tourists sunbathing on a beach. Here are some of the pictures. 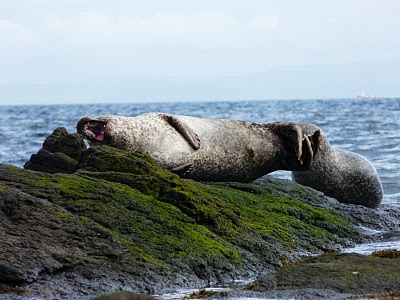 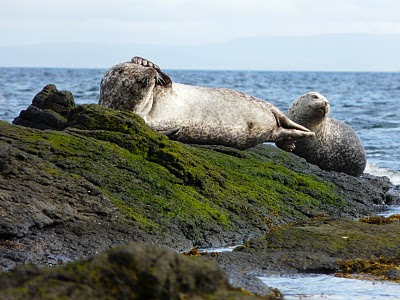 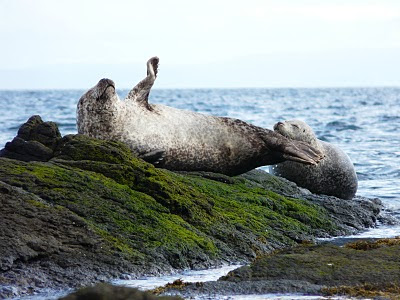 Next morning I set off in sunshine, a new experience! I made rapid progress past Pladda and round the corner to Holy Island, where I stopped for an early lunch before continuing to Brodick. The funfair was in town and the whole bay was subjected to the raucous blaring music that accompanies the nausea inducing rides. I made a swift exit and continued on to a picnic site just north of Sannox. This was a fantastic place to camp, but as the water drained away as the tide ebbed I realised I had made a bit of a mistake. It was going to be nearly impossible to launch again at anything other than high water, that meant a 5am start. I began to wonder how motivated I was going to be next morning.

I needn't have worried. After a dry night, I packed away a dry tent for the first time this week and was away from the campsite within 45 minutes of getting out of bed, a bit of a record for me. It was lovely paddling off into flat calm sea in the soft light of dawn. No one else was about, and the place was mine. I made quick progress across to Bute, then Great Cumbrae and back to Largs where my trusty paddle waggon was waiting for me.

Arran and Bute lack the spectacular rock scenery that other islands have in abundance but the relatively sheltered location made this trip possible when I might have backed off other more committing trips.