The (not) Coquet Island Race

Every summer the town of Amble is host to a friendly sea kayak race. This years was a little different in that waves the size of small houses were breaking over the harbour breakwater, clearly visible from the start line in the river Coquet. It was no surprise then, that the organiser had a more sheltered route planned; up the river for a mile, turn around a bridge pillar, back past the start and down to the harbour mouth, round a buoy and back to the start. It was about 4 miles long compared to the usual 5.5 mile round the island route.

The mass start kicked up lots of waves as we were all jostling for position on the more sheltered side of the river. We were soon settled into some formation wash-hanging. The turn, around a bridge pillar caused one participant to go and take a look at the fishes while the rest of us carved a neat turn and got into our rhythm again for the dash past the start/finish line on the way to the harbour. The water got a little choppier as we approached the turn but not enough to give the rescue boats any work . All this way I had been wash-hanging an Aleut II, but gained about 50 m on them at the turn. I was unable to maintain this gap and was soon overtaken. Just shows how much assistance you can get from a wash. Tried to sprint past them at the line but had nothing left and crossed the finish line fourth overall. Got the prize for fastest lady. There were probably about forty competitors in total. 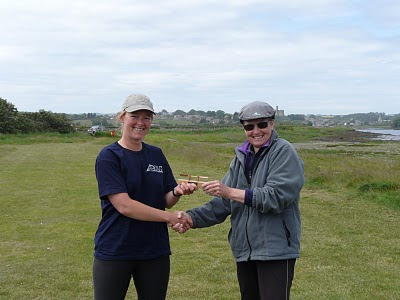 After a fantastic three days at the Stackpole Sea Kayak Festival, I was left with a week off work, a great weather forecast, a coastline I'd never paddled and no plan. Here's what happened.

Tuesday morning at the Stackpole Centre, and Mark Tozer was running a three star course. The significance of this was that he would be taking a minibus to the coast, with space for one more. Thus my start point was to be West Angle Bay. Initially I had planned to start at Stackpole Quay but the thought of getting shot at or arrested for paddling past the Castlemartin firing range did not appeal. Likewise, getting trashed in big surf at Freshwater West was bottom of my to-do list.
West Angle was a good sheltered launch, but that was not to last as I headed out towards Rat Island (lovely name) and the shipping lanes of Milford Haven. Pete Astles (Peak gear) came with me as far as West Blockhouse Point. We had to wait a while for this small boat to enter the Haven before we could make a dash for the other side of the shipping lane. It felt a bit like a game of chicken. 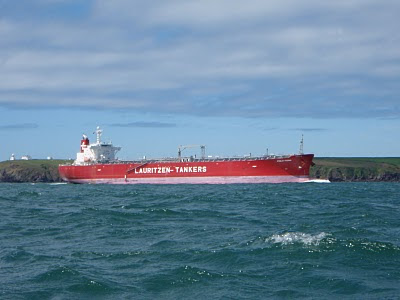 Once we reached the far side, Pete said goodbye and turned right to paddle a short round trip and back to Angle. I turned left and headed for the exposed point of St Anne's Head. I had to keep a fair way offshore as big swell was crashing into a rocky coast, sending spray skyward. The next bit of coastline was demoralising. Waves were still big and unbenownst to me, I was paddling in an eddy, reducing my speed to a mere 4km/hr. I was heading towards the red cliffs of Gateholm Island. 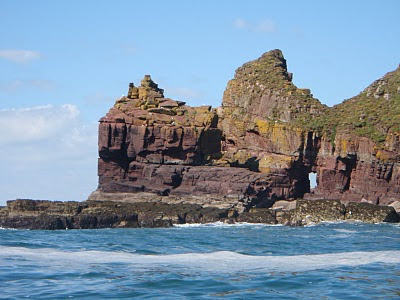 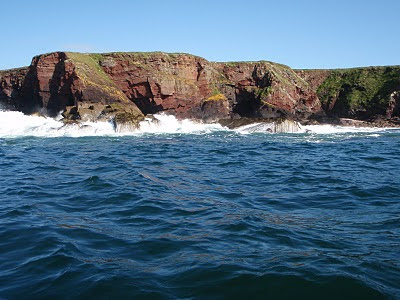 After Gateholme, my speed improved and I started thinking about a place to spend the night. The map showed places with names such as Rainy Rock and Deadman's Bay, but by now I was within a stones throw of Jack Sound, the gap between Skomer and Midland Isle and the mainland, and so despite knowing that the tide would be against me, I thought I'd take a look.

Flow was swift but by sneaking up the eddies I was able to pass through Jack Sound and round Wooltack Point for a little respite at St Martin's Haven. As a tour boat spewed at least fifty passengers onto the landing stage I decided this was not the sort of place for a surreptitious wild camp and continued on to St Bride's Haven. This was more like it. A quiet beach, few people and a small patch of flat ground by a restored limekiln for my tent. 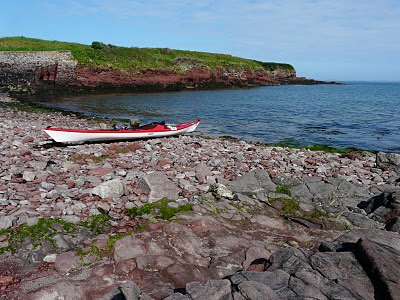 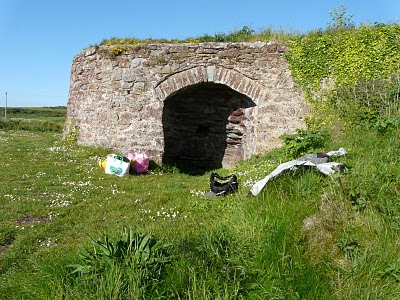 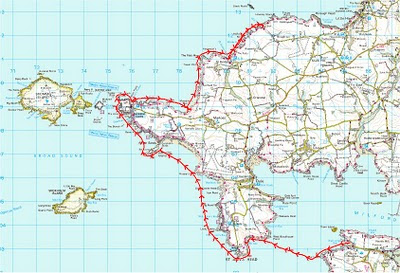 Next morning I awoke to blue sky, little wind and a choice; straight across St Bride's Bay to Ramsey or round the edge of the bay for more interesting scenery. The scenery won, and I set off towards Stack Rocks and Broad Haven.

Following the shore is definitely more fun than a crossing. You can at least be certain you are making progress, and the view changes constantly. I was in a very relaxed mood as I cruised along the back of St Brides Bay, watching the surfers at Newgale. Perhaps I was looking to the right a little too often, as all of a sudden a towering wave came out of nowhere to my left. I turned my boat to face it and paddled as fast as I could, to make it over just a second or so before it broke. The roar as is crashed was incredible and I was rather glad I was safely to seaward. Could have been interesting and once again the sea reminds me to keep alert.

From Newgale there were fantastic cliffs all the way to Ramsey Sound. Loads of arches and caves, layered rocks folded and buckled and tiny bays accessible only by kayak. As I reached Ramsey sound, an hour into the south going flow, I thought I'd have a go at getting through. The water was flat but moving fast as I eddy hopped my way towards St Justinian. Round the corner Whitesands Bay was heaving with people, so I sped on past to Porthmelgan, a small sandy beach accessible only on foot along the coastal path or from the sea. Above the beach I found the perfect campsite, complete with four legged friends. 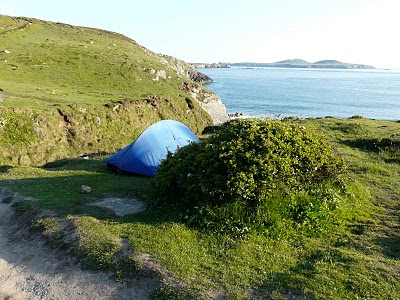 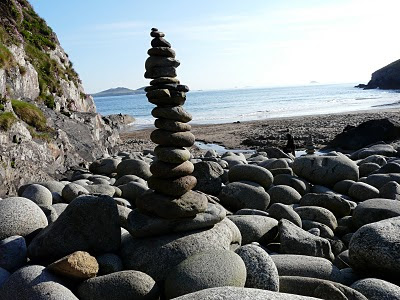 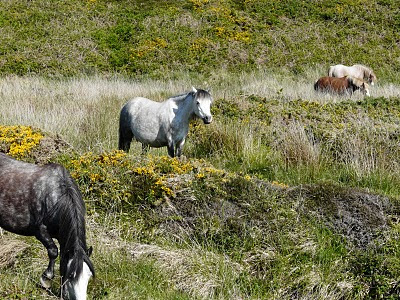 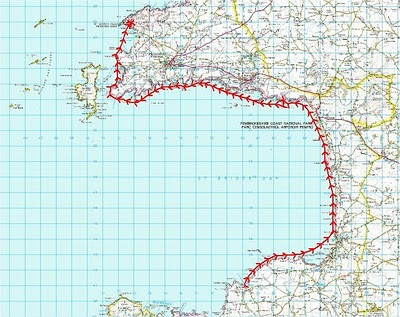 Next morning, another beautiful day, I set off for the first time with tidal assistance. It was a good feeling being swept round St David's Head. The rest of the day was a fantastic series of cliffs, caves, arches and small bays. I went for a brief explore at Abereidi to find the 'Blue Lagoon', an old quarry, now flooded. At Strumble Head I had a choice of narrow gaps between islands or round the outside. The narrow gaps won. 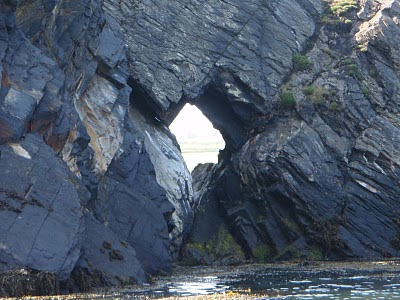 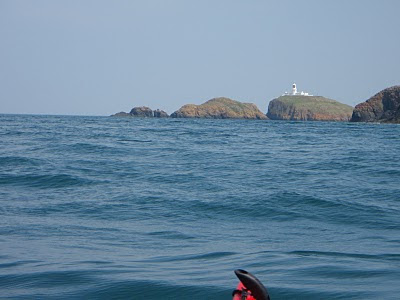 After Strumble Head, I made for Fishguard Lower Town. I'd paddled a long way and felt I deserved an ice cream.

Back on the water I set off to find somewhere to spend the night, and passed some amazing rocky sculptures.... 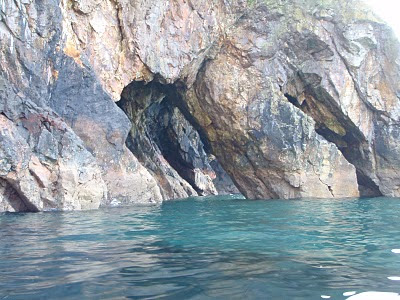 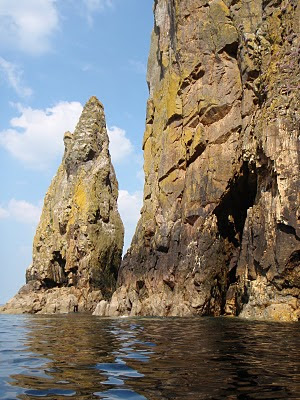 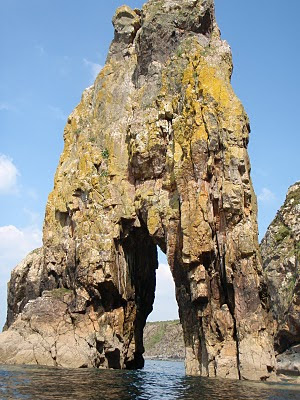 ...and then found an ideal campsite. 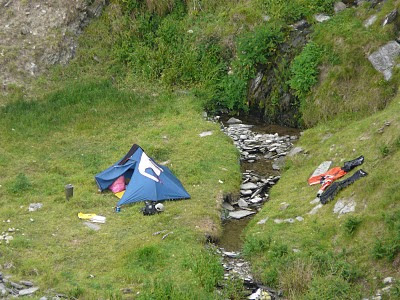 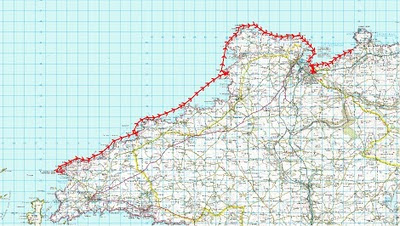 A slaty pebble beach (boat friendly), flat grass, fresh water and ample firewood. What more could I want. A little later I had a visit from a contingent of Haverfordwest Canoe Club out for an evening paddle. I am more than a little bit jealous that they have this sort of scenery for an evening paddle.

The final day of my solo expedition was remarkable for the rock formations. Words aren't needed but here are a few pictures. 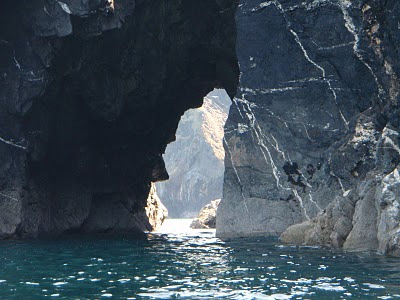 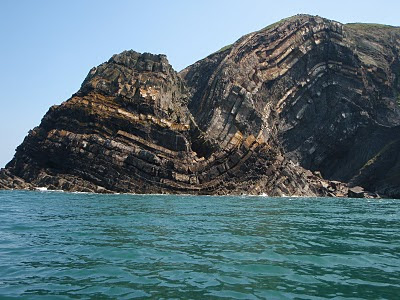 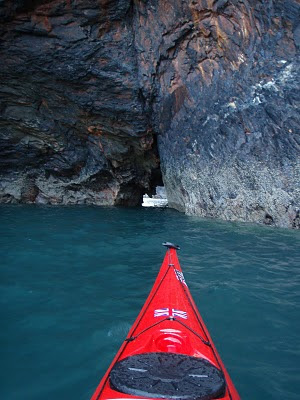 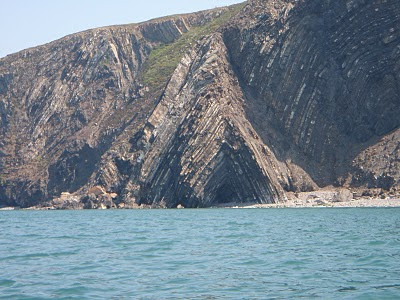 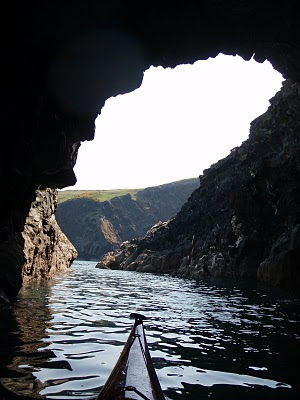 I finished my journey in the Teifi estuary. This was a week of amazing weather and a coastline I had never paddled before. It was also the first time I had paddled the Cetus LV loaded for expeditioning. I was initially a little worried that it may be too low volume to accommodate all the paraphernalia of camping but I needn't have worried. I even had room in the back for my trolley. I could have carried more, but would then have struggled with the launching and landing. The boat handled well when full but is definitely more fun empty. 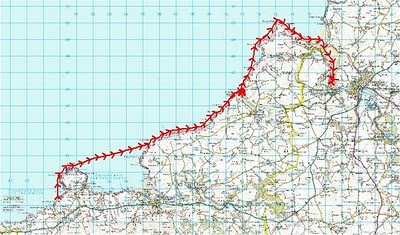 Just a few photos from a fantastic event. The weather was kind, the scenary stunning and the company great. 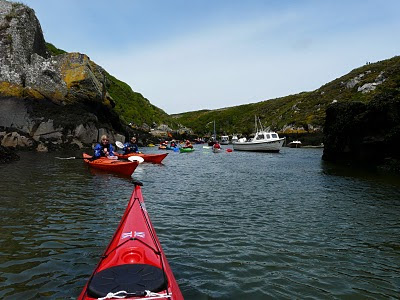 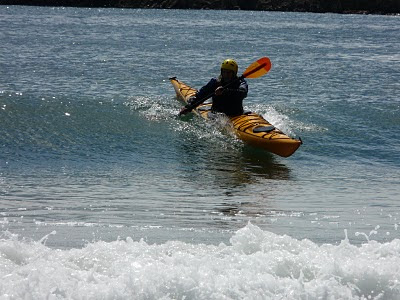 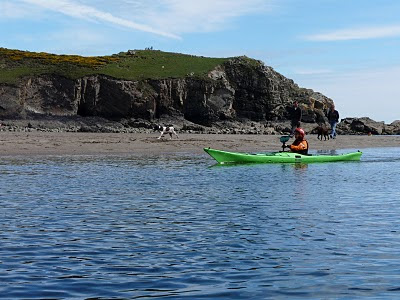 One of the youngest participants, at 11 years old 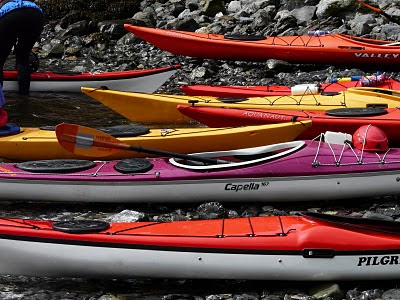