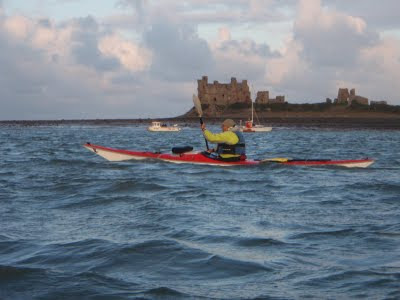 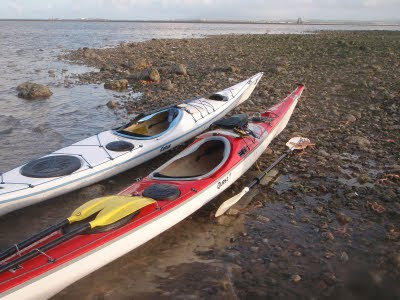 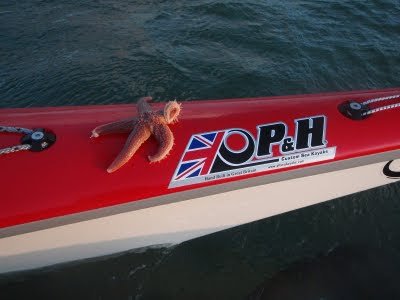 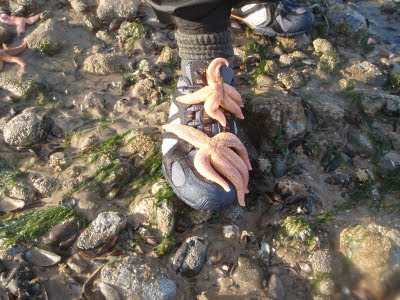 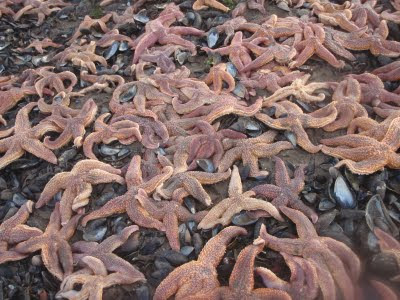 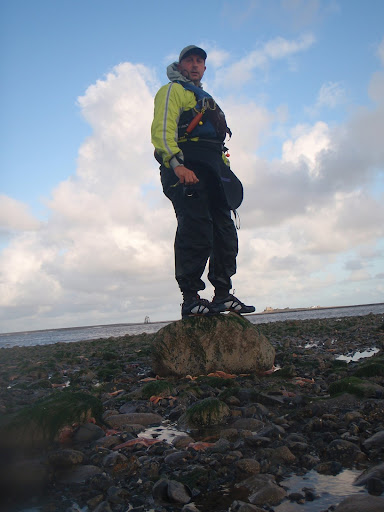 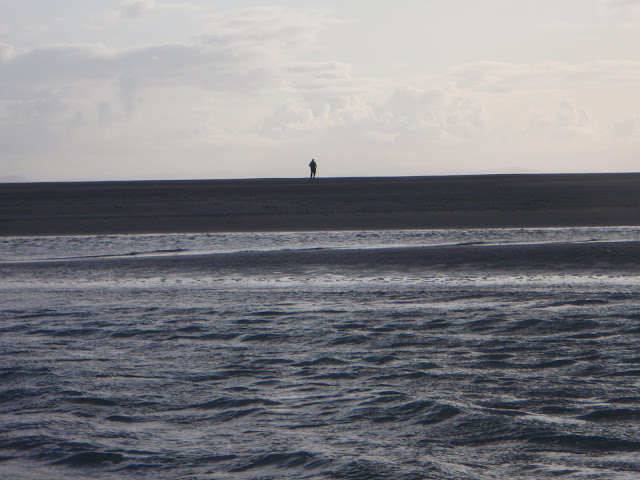 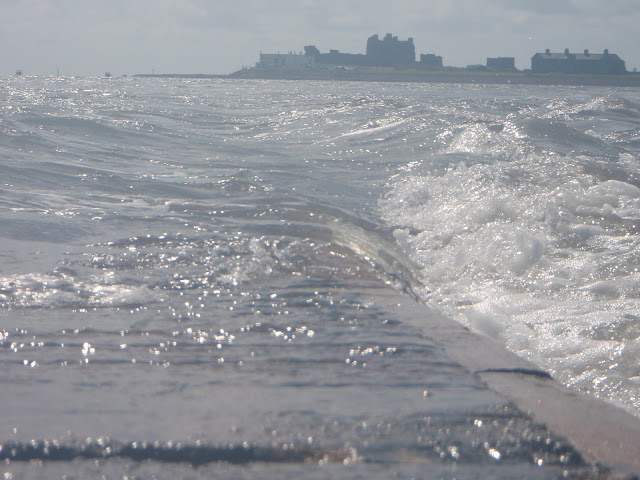 Having tried, and failed to find anyone else wanting to go paddling, there was no choice but to have a go at a solo trip. I've never paddled solo for more than a day at a time, so this was to be a first for me.
I set out in the late evening sunlight onto beautiful flat calm sea, the land in the distance being Jura, my target for a circumnavigation. 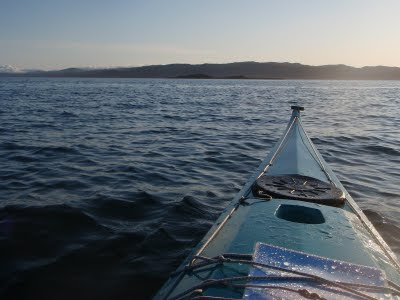 Found a lovely little camp site, just big enough for one tent. The resident deer kept popping their heads over the hillside to see what was going on. 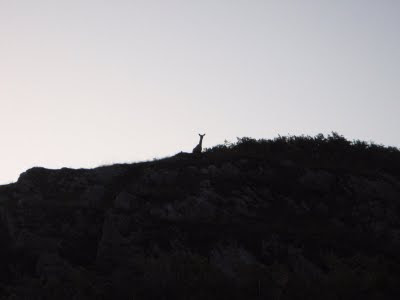 Next morning the sky was gloomy, threatening rain. I packed and launched in record quick time as it took the midges about a minute to find me once I opened up the tent. My plan for the day was to set off south down the Sound of Jura and just see how far I could get. In my haste to get ready I decided that breakfast could wait. I wanted to make the most of the tidal flow in the first half of the ebb.
This is what the view looked like for most of the day. 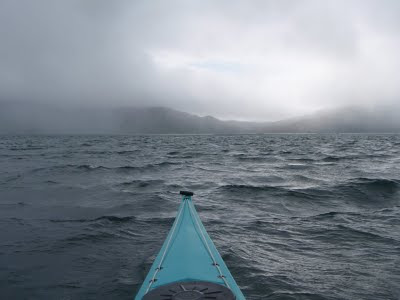 I plodded on and on into a fairly strong headwind. Then the heavens opened and the rain came down in lumps. By now I was hungry, cold and tired. It took me ages to find somewhere to land. I ended up squashed into a cave like niche in the base of a cliff to get what little shelter was available. I heated myself a tin of baked beans and made a mug of coffee. My little luxury for this trip was a single mug sized coffee percolator, Jimski's idea, and one that I was very grateful for.
After what seemed like forever I finally turned the corner into the Sound of Islay. I had been navigating from memory as I discovered I had lost two of my laminated map sheets along the way somewhere. I arrived at the Sound of Islay with the flood tide pushing me along at an ever increasing speed. After a whole day of strong headwind, and latterly little tidal assistance, the boost was tremendous.
At last, some shelter from the wind in the Sound of Islay. 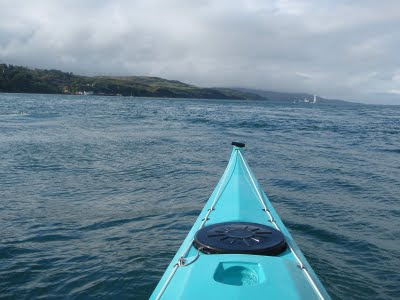 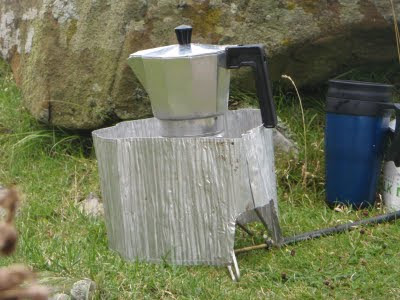 Woke up next morning still keen to paddle despite the 50km day yesterday. Shortly after setting off I had an audience on the beach. 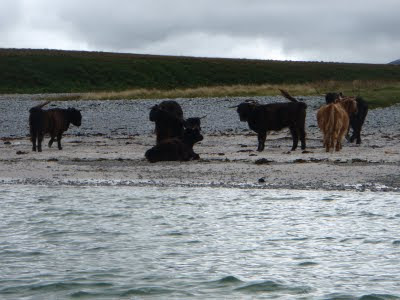 Rock scenary was spectacular. Lots of cliffs and caves, and the occasional arch. 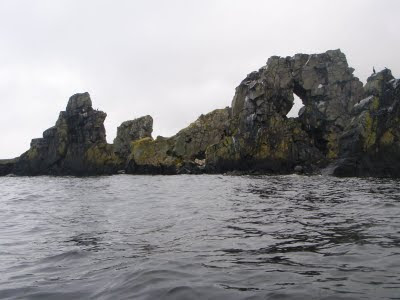 Had lunch at the bothy at Ruantallain, on the north shore of Loch Tarbert. A small bothy, but very welcome shelter. 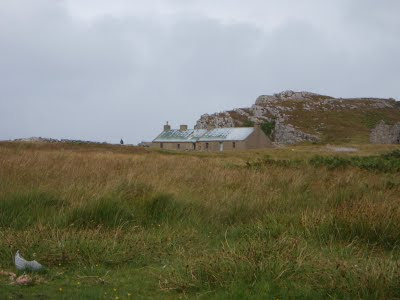 Had another fairly long paddling day in order to reach the bothy at Glengarrisdale. It was sunny as I arrived and the setting was spectacular. 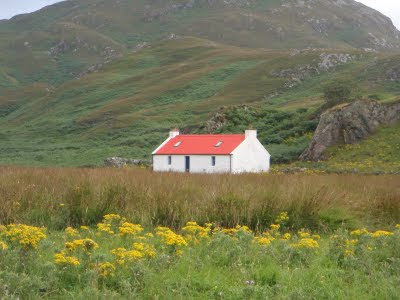 Spent a very creepy night in the bothy by myself. This bothy is very well equipped and only about 100m from the shore. There are two rooms downstairs and a loft with hammocks made of fishing nets. A wonderful place.

This left me a short paddle the next day to reach the Corryvreckan, a tide race with a fearsome reputation, no doubt deserved but not while I was there. I arrived about two hours into the East going flow and found it moving but mainly flat. A school of porpoises lingered at the downstream end of the race, presumably waiting for the food to come to them.

All I had left to complete this trip was a massive ferry glide across the Sound of Jura back to my car at Ardfern and a well earned meal at a local cafe.