A Quick Lap of Walney

This trip was last minute planning at its best. One minute I was wondering what to do with a day off work and a good forecast, the next, I was wheeling my boat down to the far distant sea at Earnse Bay on Walney Island. Tides were good for a circumnavigation, so I set off southbound, with tiny wavelets lapping my boat from the side and the ghostly silhouettes of the windfarm turbines appearing out of hazy murk in an ever changing succession of transits. There wasn't a lot to see. The west side of Walney is low lying sand and pebble shore topped with flat grass. As I approached Hilpsford point a couple of wooden groynes broke the monotony and the tide began to make its presence felt as I was quietly given a helpful shove.

Round the corner I was met by a beach black and white with eider and oystercatcher. I managed a quick snap of a sandwich tern and was then followed by a large contingent of seals.
Once I'd 'done' the nature reserve I started the slog up the Walney Channel to Jubilee Bridge, where I met some intrepid open boaters who had abandoned the dry rivers and ventured onto the sea though I imagine that Walney Channel has a lot more in common with rivers than it does with most sea areas.
In no time at all I was rounding the corner at Lowsy Point and turning the boat southwards to get the circuit completed. Landing directy onto the slipway at Earnse cost me a welly full of water but did at least mean a short walk to the car. 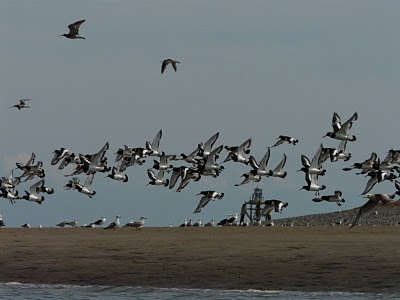 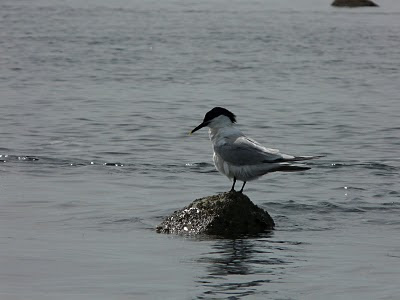 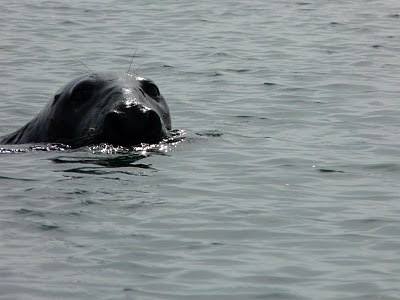 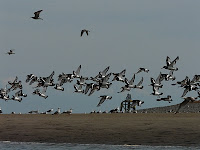