On my way home from a week working at Glenmore Lodge, I stopped off for a day out in the sunshine at Bass Rock. Conditions were great, with little wind and small swell. 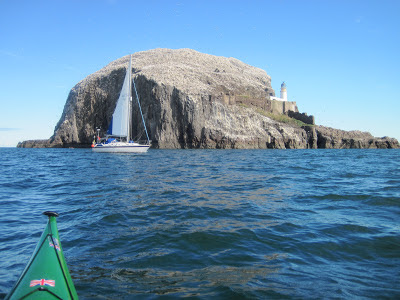 I paddled with Gianni, who lives in Edinburgh, just half an hours drive from this little gem. The island is the remnant of a volcanic plug, and is now home to about 150 000 pairs of gannets. Approaching closely you get a good whiff of the gannet guano.﻿ 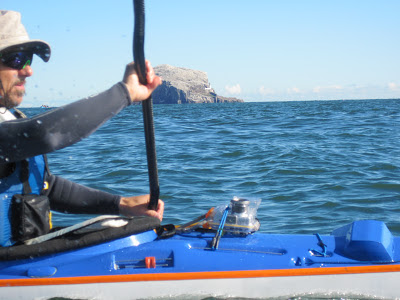 I came across this little chap doing his best to drown beneath the steep cliffs of the rock. As I hauled him unceremoniously aboard he looked more dead than alive, and I planned to find a rock ledge on which to give him a chance of recovery. Within minutes though he was recovered enough to make me worried for my own safety. His huge beak was very close to my face and he was starting to take an interest in his rescuer. As he moved around it became obvious that he had a broken wing﻿ and stood a very poor chance of survival. One more lunge towards my face and I'm afraid his fate was sealed as I left him floating around on the sea. I hope he didn't suffer for long. 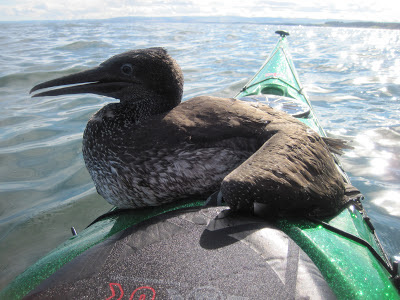 This is Gianni exploring a narrow rock cleft close under the remains of a castle on the Bass. 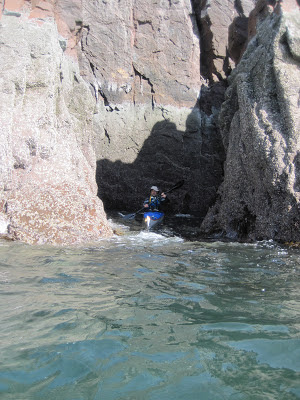 ﻿
Bass rock is just 2km from the mainland﻿ and is a lovely paddle, with views to Tantallon Castle. We launched at North Berwick, paddled out to the rock, and then returned along the rocky mainland shore. We passed the most amazing hidden harbour carved out of the red sandstone rock. If we hadn't seen another group of kayakers disappear into a cleft in the rocks we would have missed it.