Congratulations to Mark and Heather for organising another great bash. There were loads of people, loads of boats, loads of beer, great company, great paddling and great atmosphere. What more could you want...and the weather was pretty perfect too. Here are some pictures. 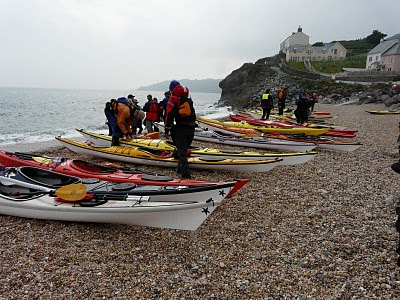 Loads of boats ready to launch at Hallsands beach 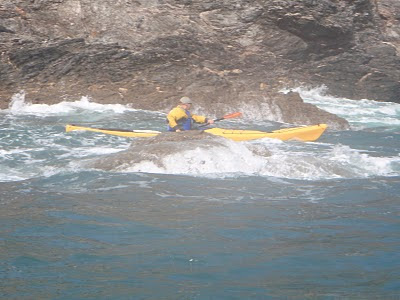 Tim puts the new P&H Delphin through its paces... 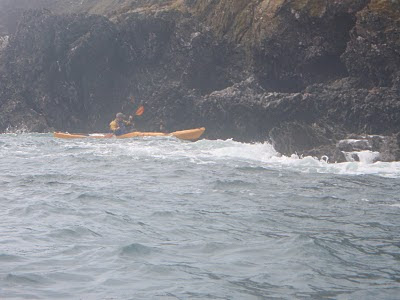 ...and discovers that it's lots of fun. 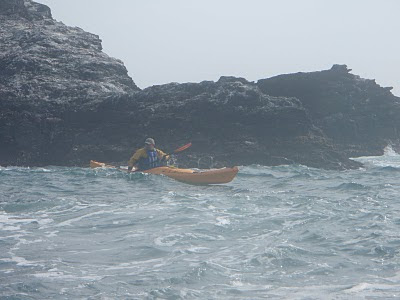 Now you can see why it's so manoeuvrable 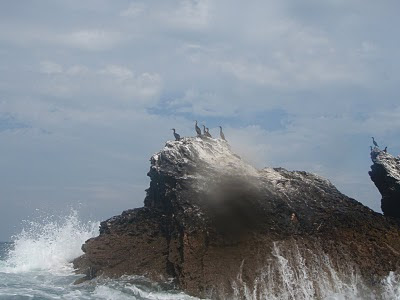 Hard to tell where the spray ends and the bird poo begins. This rock stank!
Posted by Kate Duffus at 18:35 1 comment:

Three paddlers, three days and three island campsites. What could be better? Here's what Rob, Dave and I did. 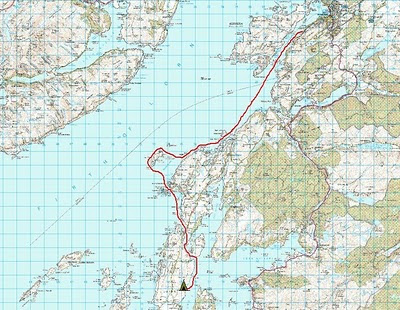 There's something quite liberating about setting off on a trip with no real plan where we were going. With Oban behind us, blue sky above, calm sea below the world was our oyster. We set off towards Seil, weaving in and out of tiny skerries. Every rock was topped with a cormorant or two and the view expanded as we rounded each corner. Insh island looked inviting so off we went enjoying the gentle up and down of the sea against vertical rock. With no suitable landing hunger spurred us on to a refuelling stop on Easedale. Finally we came to the point where we had to have some sort of plan so settled on the east side of Luing as a suitable campsite. The Cuan sound was flowing against us but the numerous eddies made progress relatively easy. In the pool between Luing and Torsa we crept past a seal colony, attempting to get past without a mass exodus into the water. Didn't work, soon, twenty or so pairs of dark eyes were watching our every move. Between Torsa Beag and Luing we ran out of water and had to haul the boats up a short shallow bit. Back afloat we found a lovely spot to camp, with evidence of past settlement, flat short grass, plentiful firewood and a wall to rig the tarp from. Perfect. 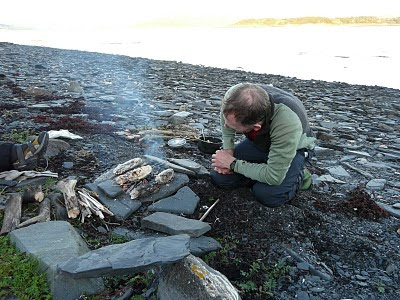 Here's Dave inspecting his culinary handiwork. With three nights camping and three of us, we each cooked an evening meal and tried to outdo each other in deliciousness. On the menu a la Dave was chicken breasts marinaded in ginger and lime roasted over a bed of hot embers, served with herby sweet potatoes and salad leaves with olives and feta cheese. Dave was most concerned that we shouldn't get scurvy so pudding was a fresh fruit salad.

Day two dawned clear and calm so we set out with the intention of a play session on the Grey Dogs. All good plans are there to be altered and this was no exception. As we rounded the southern extremity of Luing and the great bulk of Scarba came into view we thought it would be good to get to the Grey Dogs via the Corryvreckan. The ebb was coming to an end and we planned to creep through along the Scarba shore using the eddies. All was good until the final corner where we met tidal flow very nearly as fast as Rob could paddle. Plan B would have been to wait until the flow slackened further but Rob gritted his teeth and went for it and soon we made a lunch stop just short of our intended playground. 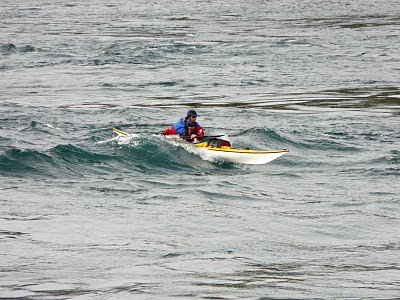 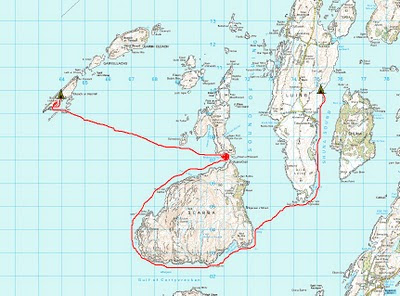 And here's our route to the midgiest campsite on earth, on Eileach an Naoimh, the most southerly of the Garvellachs. Within seconds of landing, the wee beasties were eating us alive. Our priorities were headnets, DEET, a smoky fire and then unloading.

It was Robs turn to cook and he produced smoked salmon on oatcakes as an appetiser, vegetable soup starter, followed by tagliatelli carbonara (with loads of bacon and mushrooms) and the piece de resistance, baked on the fire, chocolate brownie with custard.

Day three promised another smooth paddle so we set off on an exploration of the Garvellachs and then island-hopped our way to the Cuan Sound and made for the Bridge over the Atlantic. 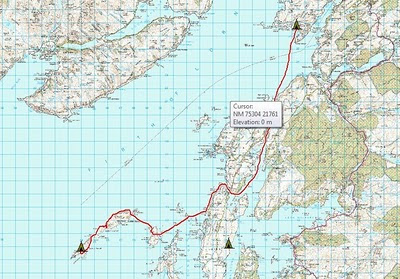 Conditions were glassy smooth and we reached the Clachan Sound at low water, fortunately at neaps so there was plenty to float the boats. The final pull of the day was across to Kerrera and a campsite in the Shadow of Gylen Castle. 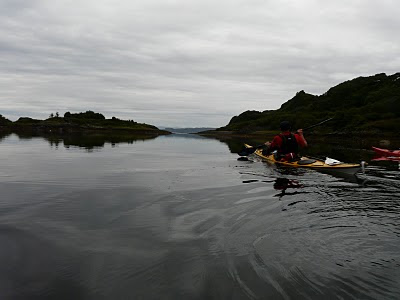 My turn to cook and the menu was Mexican. An appetiser of jalapeno peppers was followed by spicy bean and chorizo sausage wraps, with avocado salad, cous-cous and sour cream. Pudding was swiss roll and custard.

Next morning we parted company. I was on a tight schedule to get home ready to pack for another trip away so I paddled straight up the Sound of Kerrera back to my waiting van, while Dave and Rob took the scenic route round the island.

A short period of settled high pressure weather made this trip a lovely calm experience. We didn't cover any vast distances or paddle particularly fast, it was just a good chance to chill out a little, cook good food, drink whisky and enjoy the scenery.