Another Lap of Jura

This time, I had company. I paddled with Rob, whose culinary skills would give Delia Smith a run for her money, and his mate Tom. Tom turned up with his brand new, never been on the water Scorpio (still had the price tag attached!) while Rob had begged or borrowed an elderly Capella. I paddled a borrowed Cetus, and while I found this boat too big around the cockpit area for me, I was very impressed with the way it handled while full of expedition gear. It was a bit like a tardis when it came to packing. The gear just kept going in the hatches and they never seemed to fill up. Another bonus was the sweetie hatch on the front deck, big enough for hat, VHF, sunglasses and sweets, and all within easy reach. 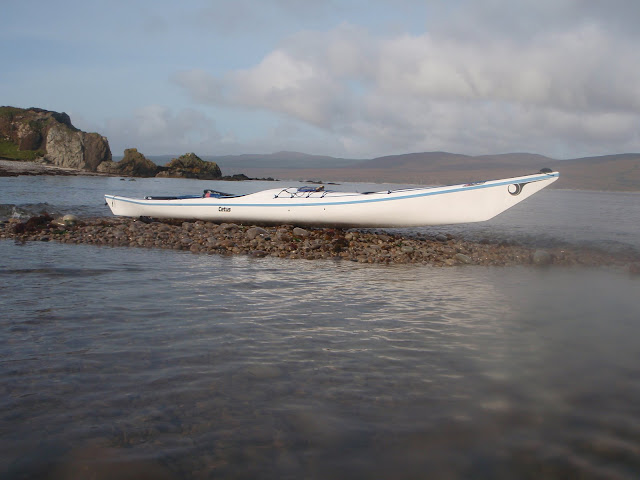 We set off from Craignish Point, beyond Ardfern on Wednesday morning, following a day of stormy weather on Tuesday. Although now fairly calm, there was still plenty of evidence of previous high winds. We launched into the full flow of the Sound of Jura ebb, which carried us rapidly south as we made the crossing to Jura. There was plenty of turbulent flow along the way and it kept us awake just working out which direction we were actually moving in. Thank goodness for the GPS.
On day one we managed 30km, initially with significant tidal flow in our favour but ending with a noticeble contrary flow. We camped at an unusual site, with perfect short grass and shelter, between the walls of Lagg Pier. What impressed me most about this trip was the number and variety of animals we saw. This fellow wasn't bothered as I walked past on my hunt for fresh water. 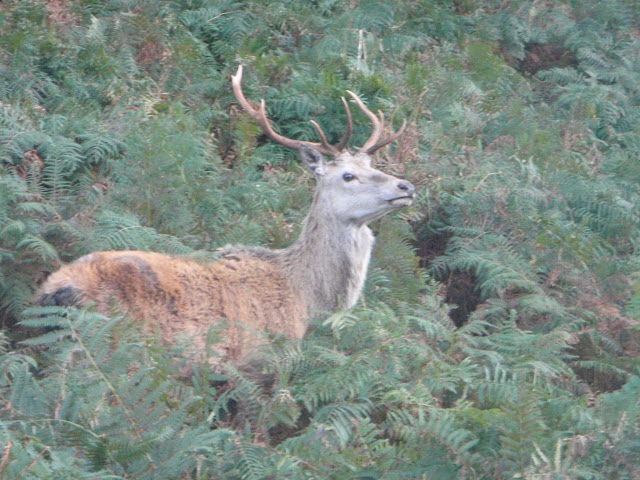 Jura is an island with an enormous population of deer, believed to be around 6000, while the human population is a mere 180. We saw deer all over the place, and in particular on the beaches along the west coast. 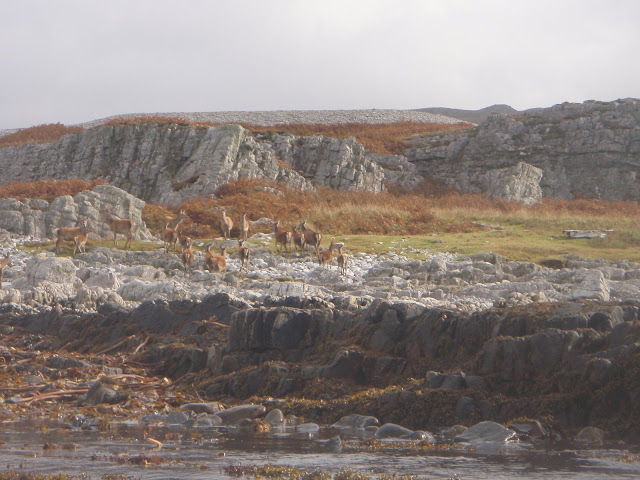 On day two we got away early, keen to have a favorable tide all day. We found the paddling to be more interesting than further north as the headlands and islands are more frequent and break up the distance better. The Jura hotel provided a mid-morning break, and while we sat outside enjoying the coffee we observed that the ratio of staff to customers appeared to be similar to the ratio of deer to locals. We were vastly outnumbered. 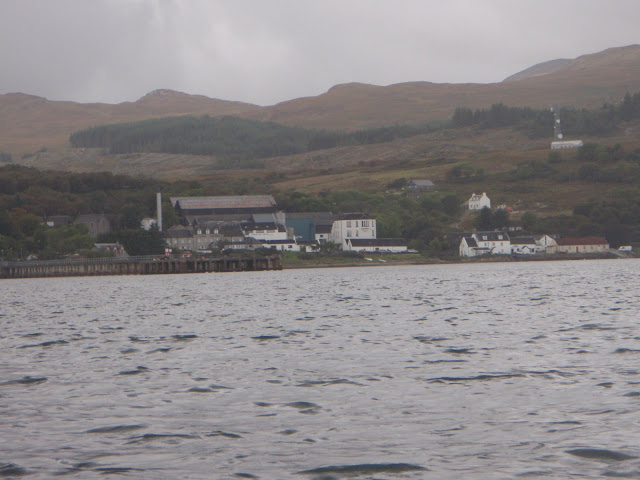 Jura Hotel, distillery and stores from the water. This is Craighouse the population centre of Jura.
After coffee, we set off towards the Sound of Islay and had an enforced long lunch break as we waited for the tide to begin flooding. Not long after, we were shooting along at 13km/hr looking for a camping spot. We decided to make to most of the flow and camp only when we felt the tidal advantage to be lost.
Next morning we awoke to flat calm sea and little breeze. For the whole of the west coast we had amazing rocky scenary and flat conditions so we could really appreciate the cliffs, arches, caves, deer, sheep and goats. 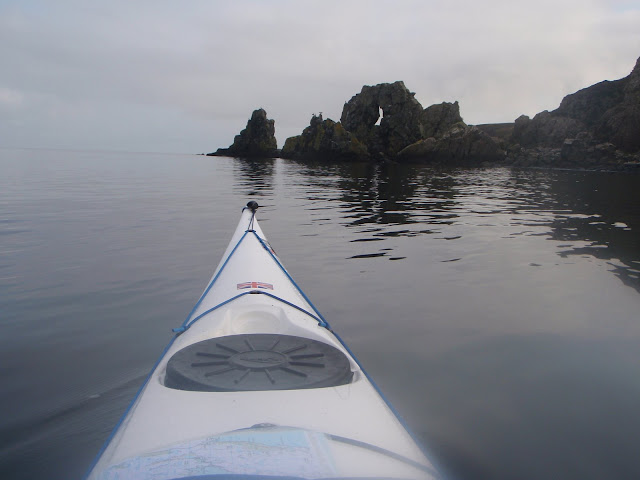 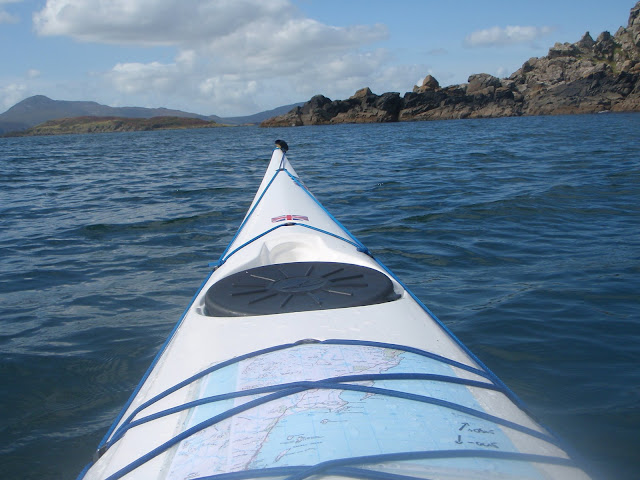 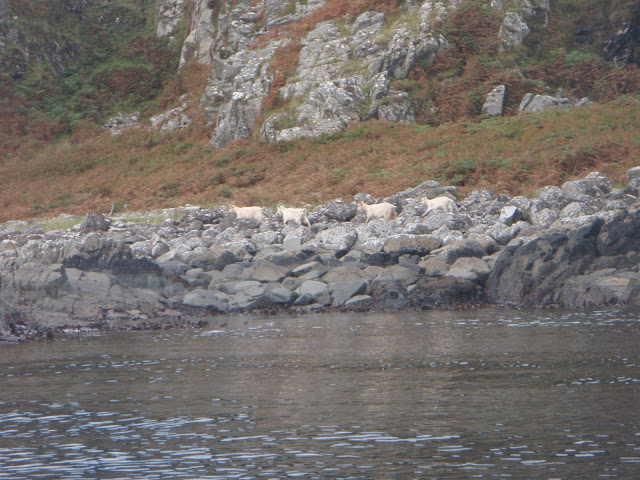 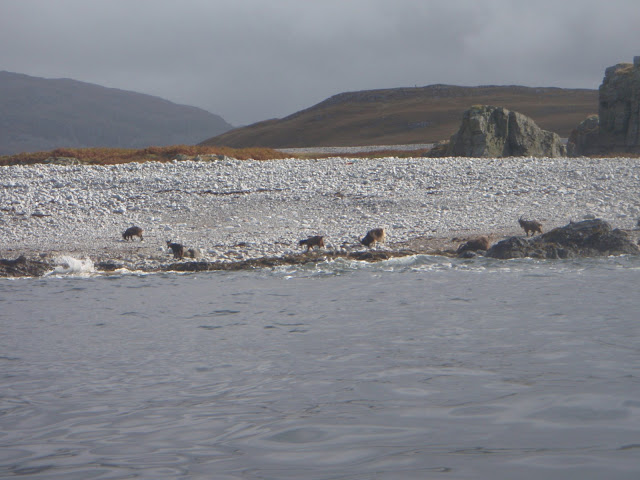 Seaweed eaters along the shore.

After another stop to collect firewood, we ended out third day paddling at Glengarisdale bothy. This is a gem. It was great to have a night away from the midges where Rob could demonstrate his culinary prowess. It also left us within easy striking distance of the Corryvreckan. We planned to paddle 'the Gulf' at the start of the ebb, when flow should be minimal.

Our final day paddling dawned calm and dry and we set off in good time to reach the Corryvreckan at the appointed hour. Rob had been watching videos on You tube and had an idea that the 'C' would be a maelstrom of whirlpools, turbulence and general nastiness. I tried to reasure him that it would be an anticlimax but he didn't believe me, that is until he saw it, flatter than the proverbial pancake.

It was just a flat paddle across the Sound of Jura to Craignish, and Rob's van at the end of our journey. There is something very satisfying paddling all the way round an island. A sense of completeness. This trip has given me an idea for a theme to next years paddling. I'm going to see how many islands and island groups I can paddle round. 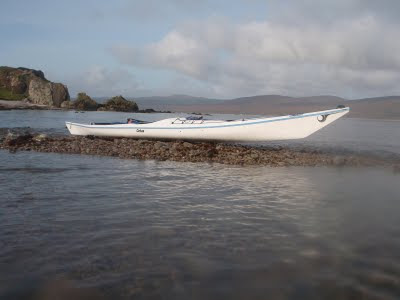