This was a short paddle along an unusual bit of coastline. Spurn point is a long, narrow heap of sand that protects the mouth of the Humber from the lumpiness of the North Sea. The scenary was somewhat monotonous, being just a heap of sand, punctuated periodically by the remains of wooden groynes. The groynes had been built in a vain hope that a few bits of felled timber could halt the natural cycle of erosion and deposition that had occured before Man interferred. Needless to say, nature is winning and the fortifications are decaying. 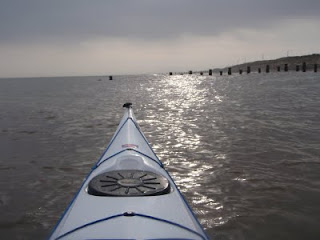 Just off the point, sea conditions became more interesting and I was drawn like a magnet towards the overfalls. 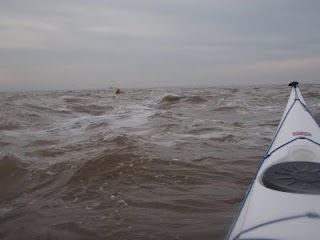 This trip has the advantage of starting at a cafe and finishing at a pub. The two are about half a mile apart and the short walk to collect the transport was a good way to warm up on a cold day. The two establishments could not be more different. The cafe was very welcoming, the owner chatty and friendly and the food and drink good. The pub meanwhile has a very frightening landlady. I got shouted at for daring to suggest that the brown aqueous solution I had been served as coca-cola was in fact flat. I think I will give this one a miss in future. The only good thing about the pub was its proximity to the get-out. Here the pub is in the background as I put the Cetus through its paces in preparation for returning it to P&H. 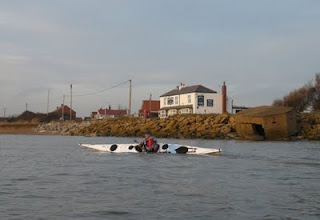