Easter 2009 saw four of us setting off to Scotland with no real plans where to paddle. The weather forecast was so gloomy that there was some doubt as to whether we would paddle at all. We aimed for the Mull of Kintyre and ended up camping on the shore close to Claonaig, where the ferry departs for Lochranza on Arran. For the next two days we visited every castle and tea shop between Tarbert and the southern tip of the Mull. There is a limit to the amount of tea I can drink, and just as we were all feeling a little washed out the forecast started to promise improvement.


Gloomy skies and wild seas greeted us each morning. 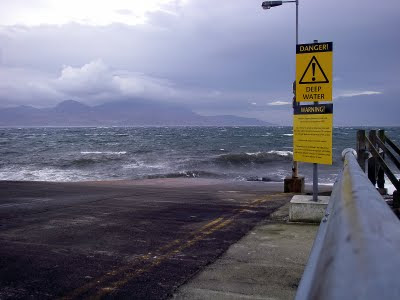 We awoke on the third morning to find that reality matched the prediction and we could at last get afloat. 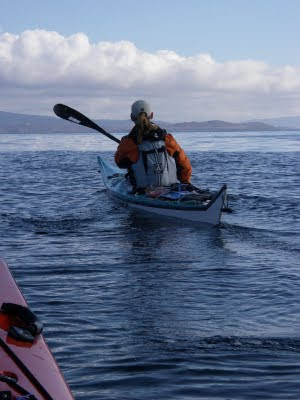 A friendly hotel at Belochantuy provided parking and an easy launch spot. Conditions were not calm, but forecast to improve so we packed for an expedition and set off. The plan was to head north along the Kintyre coast until the narrowest part of the Sound of Gigha. The weather was out to prove that it was in charge again and with what looked like a storm approaching we made the crossing to Gigha as fast as we could. Safely over the Sound we were deluged by a short, sharp shower. Rain that came down in lumps and stung the face if you dared to look up. It didn't last long but wasn't pleasant and the temperature dropped noticeably.
Next we had to find a campsite. We landed on Gigha about an hour before high water on a particularly big spring tide, all the best looking spots were threatened with innundation as the tide rose. Eventually a passable spot was found. Not ideal but it would do. I was cold and tired and didn't really care. 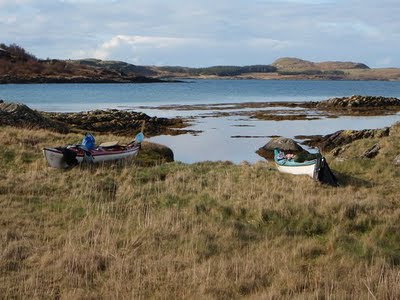 I'm sure Gigha has lots to offer the pedestrian explorer, but for this visit it remained unexplored. Next morning we awoke to blue sky and sunshine - what a change! Launching had to be done in a hurry as the sea retreated. 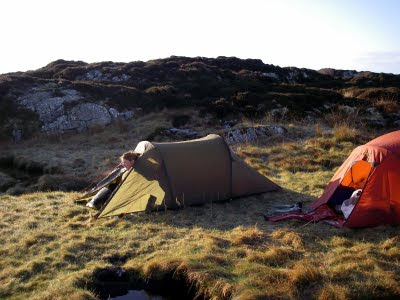 We set off on an anticlockwise curcumnavigation. 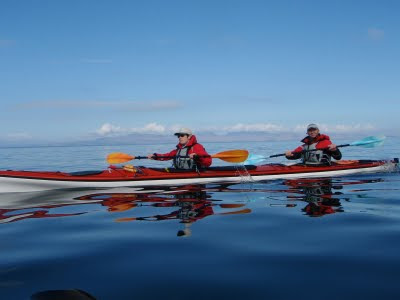 Every nook and cranny of the island was explored including the wreck of the Russian factory ship 'Kartli' which ran aground in 1991. 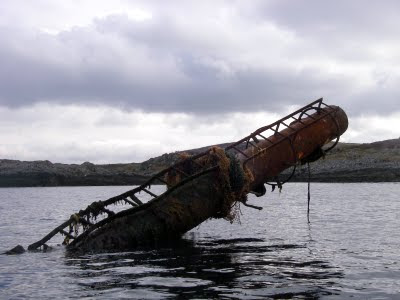 We ended up heading for the island of Cara to look for a camping spot. Conditions at the southern end were lumpy, a mixture of swell and clapotis making a confused mixture of waves and lumps. Nick and Ali in their double found this quite difficult. I guess Ali had a wetter ride that we had in our singles.

The camp site made up for any difficulties getting there. Flat grass right beside a short sand and pebble beach, with a grassy bank between us and the southerly wind and as if that were not enough, an abundant supply of driftwood. 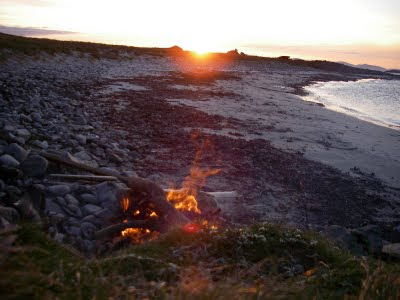 Plenty of firewood, whisky and chocolate made it a memorable evening. 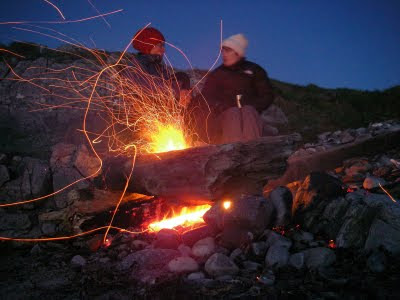 Next morning we had no option but to return to out cars at Belochantuy for the long drive home. This was a short, but lovely trip away. My first camping trip of the year, and I hope the first of many.