A fine saturday in June, what else was there to do but go for a paddle? I set off from the southern end of Seil island heading towards the island of Belnahua, with its relic of long gone industry. I had no real plans for the day other than to go and see the Garvellachs. The sea conditions were calm, very little wind and a dry forecast, perfect. This is belnahua, the buildings are what's left of a slate quarry. From experience the grass is so thick that camping on it is like sleeping on a matress. It's also quite difficult to get tent pegs through it. 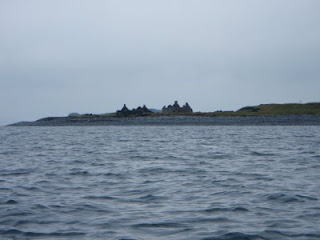 Next I paddled to the most northerly of the garvellachs. By now I was really enjoying the solitude and fantastic conditions. Further south along the island chain is evidence of habitation, but not as we know it. This is the remains of a beehive cell, lived in by those who believed that self sacrifice would make the world a better place. 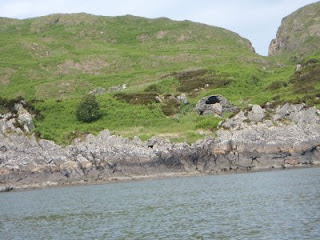 From the southern end of the garvellachs I had to make a decision, where next? Scarba, across the way looked enticing. I had already paddled the Grey Dog, the tide race to the north of the island, and the Corryvreckan was calling me. It had been on my 'to do' list for a long time and maybe today was the day? I set off, wondering if it was the right thing to do. I had heard horror stories about what the Corryvreckan can be like. I also knew that the weather conditions were as good as I was ever going to get. I was also due to hit it towards the end of the ebb tide, when it is at it's gentlest. I decided to go for it. As I approached, my speed picked up, there may well be no going back. The water was flowwing fast but still flat, barely a ripple. 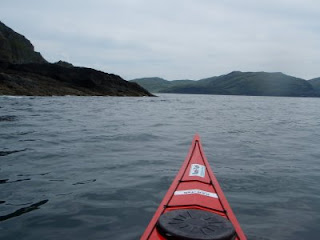 As I rounded the corner into one of the fastest tide races in the country (not at the end of the ebb, I admit) I was a little nervous. My heartbeat soon returned to normal when I discovered it was as flat as a pancake! This is what I saw. 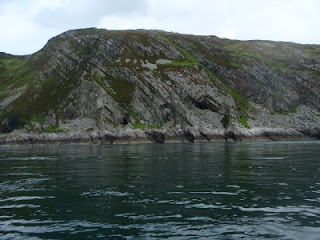 It was so flat as to be an anticlimax. I was at least expecting to see where the whirlpool forms, or some evidence of the underwater peak that causes all the maelstrom in rough conditions. Nevermind, I'll just have to go back.
Had lunch at a fantastic spot on Scarba, at the Eastern end of the Corryvreckan. Would make a fantastic camp site. The place was liberally scattered with pink and white orchids.

The rest of the trip was a leisurely ride on the tide up the Sound of Luing, past Fladda and back to Seil. On this last part of the trip I met up with two other paddlers going in the same direction as me. Paddlers are always such friendly people, so I tagged along with them for company until they left for the slog up the Cuan sound against the flow.

All in all, a lovely trip in fab conditions. Total of 42km.
Posted by Kate Duffus at 20:26