This felt like the shortest twenty mile paddle ever. The North West Sea Kayakers circumnavigate Walney. We had everything we wanted, spring tides, a warm calm day and good company. What could be better. Seven of us set off from Earnse a couple of hours after low water. This of course meant that the sea was miles away but we all had trolleys, and the certainly made light work of what would have been a horrid carry.

As soon as we were floating we could feel the effects of the tide. Winds were so light that the turbines were hardly moving. They look really close but I understand that they are a lot bigger and further away than appears. As we approached the Southern end of Walney we could feel the tide pulling us faster and faster around the corner. Hilpsford point was marked by water rushing over a shallow sandbank, with a few fun waves to surf.

The castle on Piel came into view. An imposing view, or at least it would have been when the castle was complete. Our trip had been timed to allow us to sample island hospitality in the form of beer and bacon butties. We sat on the grass stuffing our faces enjoying the sight of the Walney chanel flowing like a river.

Once floating again and enjoying the conveyor belt like flow, we took care to keep out of the shipping lane. Just as well as next time we turned round a tug was towing a huge contraption that looked like an enormous upside down table. The four towers loomed high above the tug. We guessed it had something to do with the building of the offshore windfarm as the towers looked like they ccould be lowered into the water to act as legs. This beast went by the unlikely name of 'Pauline'. A smaller tug took over as the beast was manouvred into Ramsden dock, backwards. This was an impressive bit of precision boating as the thing never touched the sides once.

We sped on, under Victoria Bridge and on to Walney Meetings, where tide from the North meets tide from the South and it feels like paddling on porridge. We had a second lunch break watching the water flow through the narrow gap as though someone had pulled the plug out, and then went across to explore the extraordinary houses at Lowsy Point. They appear to be cobbled together from old sheds, bits of prefab buildings and all manner of other un-house like things. Some had a cladding of fibreglass to hide whatever might be underneath. One inhabitant told us they are only occupied at weekends and perhaps during good weather in the summer.

It was just a short hop from Lowsy Point back to Earnse where we started. waves were breaking over the duddon bar and a couple of nudists walked along the beach. The water was lapping close to the slipway, and an ice cream van was in situ ready for us. Perfect. This was a fantastic day out, more so because it was a day of bright sunshine sandwiched between filthy wet days. 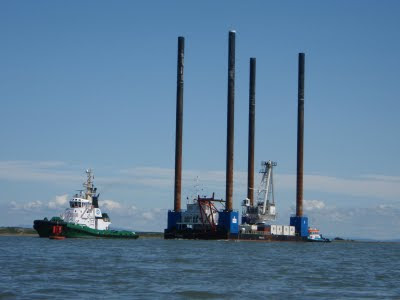