After yesterdays big day out I wanted something a little gentler today. A 40km trip round South Ronaldsay seemed to fit the bill. Within minutes of setting out I was regretting the decision. I still felt thirsty and dehydrated after my exersions of the day before. I had only brought two small bottles of drink which were clearly not going to be enough.
I started at Churchill barrier no.4 and headed off towards Grim Ness. I didn’t feel much effect of the tide until I was nearly at Halcro Head, where cliffs and caves were abundant. I was swiftly pulled along until my intended lunch stop at Ham Geo. While sitting on the pebbles contemplating life, the universe etc. I became aware of a distant roaring sound. It was obviously time to make a move. As I crept round the corner I was faced with a pile of shifting water topped with white froth. This was like Penrhyn Mawr on steroids! The race continued for as far as I could see (and it was neaps). I have to admit to sneaking round through gaps in the rocks to avoid the main maelstrom.
The south coast was a succession of cliffs and caves, not high but obviously storm battered. Brough Ness was another tide race which sped me on my way past Burwick to The Wing.
The guidebook led me to believe that I would find favourable flow up the west coast of South Ronaldsay, but I was met by a succession of back eddies, some as much as 4 knots. At Harraborough Head there were caves connecting with caves making a hollow network of tunnels in the cliffs. Had I been less tired I might have been more inclined to explore, but sadly the beauty of the caves were lost on me as I trudged on.
Another slog to Hoxa head and the narrow entrance to Scapa Flow. Cloud had lowered so I struggled to make out the island of Flotta on the other side of the channel.
From here on there was no tide as I made my way past St Margaret’s Hope and back to the Churchill Barrier. I arrived so tired that I could barely lift my boat up the steps to the car park and my waiting van. 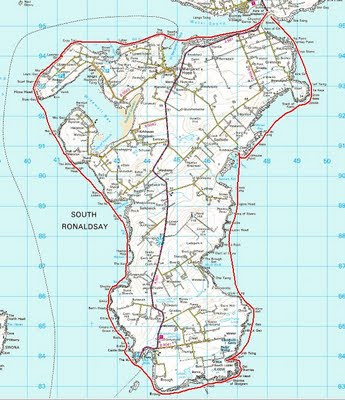 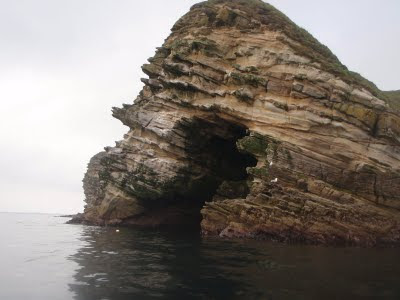 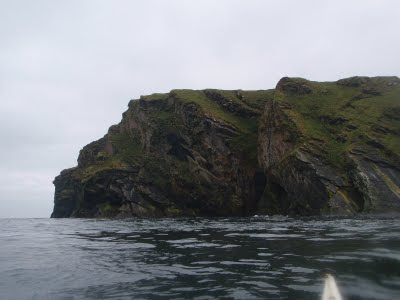