My last day on Orkney before heading south and the wind was forecast to be a blustery force 5 easterly. The obvious solution was to paddle the west coast of Mainland close under the cliffs. Mary had promised me that this would be spectacular and I was not to be disappointed. Starting at Stromness we were treated to a fast, but flat start in Hoy Sound. The picture is desceptive, we were being hurtled along at nearly 20km/hr. 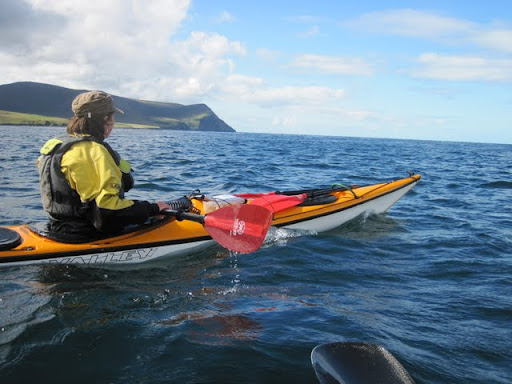 Once under the cliffs of Black Craig the fun started. There were caves everywhere. 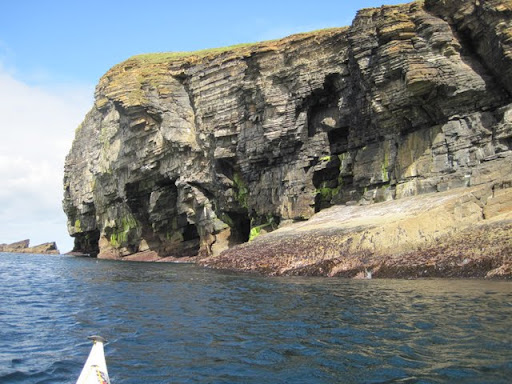 Some were so deep I needed a torch. Unfortunately I didn't have one so exploration was done in the dark. The booming sound of the swell hitting the distant recesses of the cave was quite eerie 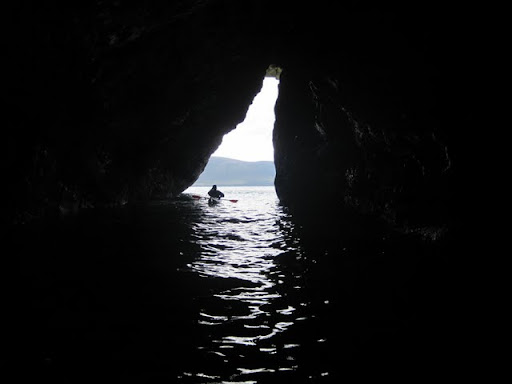 Inside the caves the rock appeared bright pink, with tiny yellow barnacles. 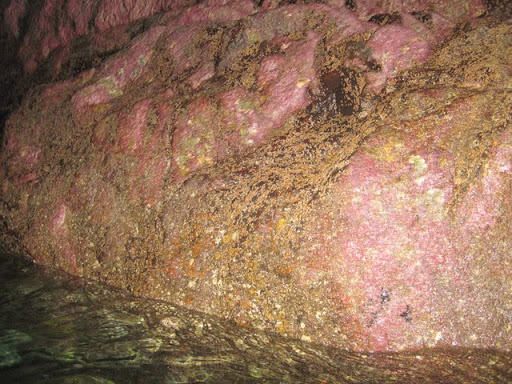 We came across a cave, just above sea level that was blowing the most amazing spumes of spray with every swell. Mary and I had a little game to see how close we could get. 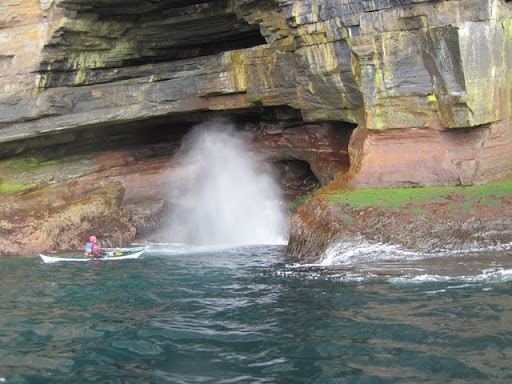 There were more caves, these ones at North Gaulton. 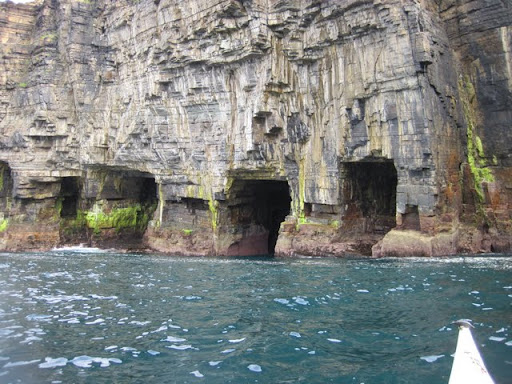 And this is North Gaulton Castle, one of many spectacular stacks along our route. 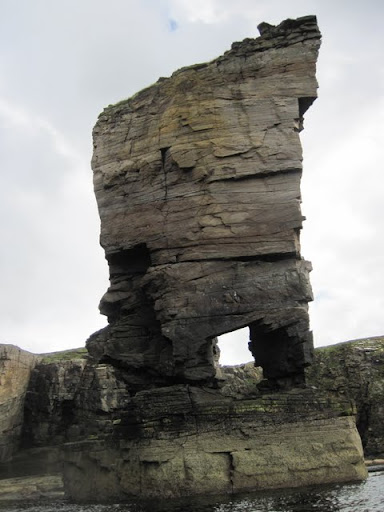 After lunch, perched on a rock ledge at the base of another stack at Yesnaby, Mary led us into a cave. From the outside it looked just like any of the other caves we had already explored. Perhaps the confidence with which she plunged into the darkness should have told us that this one was different. 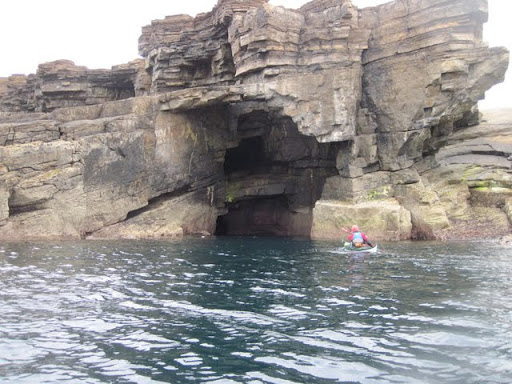 Round the corner we could make out daylight coming from a rock window. The light made the water look emerald green. 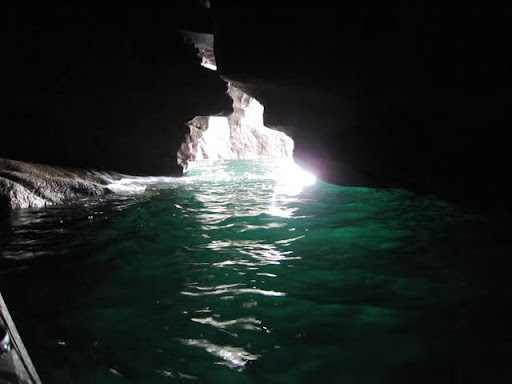 This inconspicuous bit of dry stone wall is in fact the remnants of an ancient building, the 'Broch of Borwick'. Presumably when it was built it was a little further from the sea. It has however been standing for around 2500 years. I wonder how many buildings that are going up now will last that long? 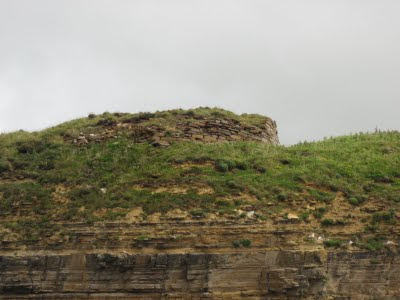 This is Ramnageo, a huge cleft in the cliffs. Shags were perched on every rock ledge as we paddled in, soon to dive underwater and turn from ungainly land birds to sleek underwater torpedoes. The water was so clear we could see them swimming along under our boats. 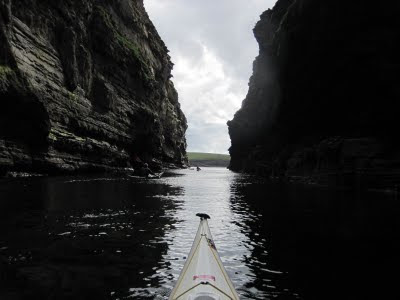 This photo is taken from Yettna Geo, another great abbyss in the cliffs, this time with a huge cave in the depths. The word Yettna is from the Norse word for Giant. The booming of swells in the depths of the cave made such strange noises that it is easily conceivable that people may heve believed giants to heve resided within 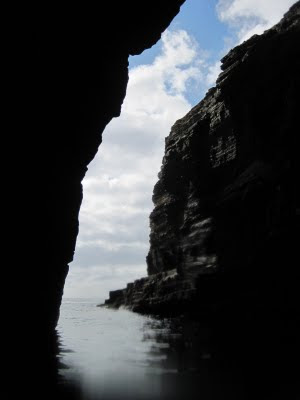 This trip had one little sting in the tail. Approaching our landing beach at Skara Brae, we were exposed to the full force of the easterly wind. Here's Mary just rounding the final headland, complete with hole in the rocks. 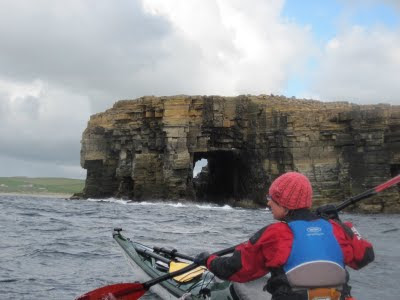 Here's a route trace from the GPS. Every time we went in the caves the GPS has had to manage with few or no satellites and has come up with some wild guesses as to where we were. They may look extraordinary but may not actually be far off the mark. Some of the caves were huge. 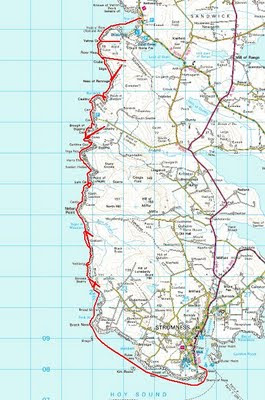 This has got to be one of my favorite trips. The only thing that could have improved it would have been leaping dolphins, a few otters, perhaps a whale or two..... I can dream!
Posted by Kate Duffus at 11:35